It was a case of past meets present for students at Solihull College & University Centre recently when they were visited by Soroptimist International’s Solihull branch. Discussing human rights, gender equality and the vote, the representatives were dressed in suffragette outfits and sashes in order to explain the history of votes for women.

Soroptimist International Solihull were recently awarded a grant to celebrate and raise awareness of the centenary of legislation being passed since giving some women the vote.

Students were met with a display featuring books containing pictures of founding suffragettes, information about the history of the vote and the movement and conversation from the Soroptimists offering glimpses into a history many students knew little of. The members conducted a short survey of willing students and staff about what democracy and equality means today.

Founded in 1921, Soroptimist International is a global volunteer movement with a network of over 75,000 club members in 122 countries. Advocating for human rights and gender equality, at the heart of Soroptimist International’s advocacy is its work across six UN Centres, where their UN representatives ensure that the voices of women and girls are heard.

‘Our aim is to empower and educate’ Angela Sadler, who visited the college alongside colleagues Janice Tilsley and Grace Hampson stated, ‘we raise money for charity, help women dealing with domestic violence, forced marriage and a number of other women’s issues’.

‘A place like Solihull College is ideal to come and visit to encourage people to vote’ her colleague Janice who has been a part of the organisation for 2 years added ‘these young people are the future of our country, it’s so important that they know about the history of the vote and its importance’.

Students and staff stopped to find out more and carry out an anonymous survey on voting. Performing Arts tutor Liz Ravenhall was one of those who entered into a discussion. ‘I think it is great to have visits from organisations like this, it’s invaluable for young females coming through college’, she stated ‘it is great to empower women and to bring this further into their consciousness especially while young’.

The organisation runs projects that help women and girls achieve their individual and collective potential, realise aspirations and have an equal voice in communities worldwide.

‘It was very educational’ admits new student Danielle Horton, ‘I was aware women had to fight for the vote and had a basic knowledge of that but I didn’t realise just how extreme the consequences were’.

Fellow student Talyaan Pambou, added. ‘I thought it was great that the stand was exhibited at the college and that the society are advocating for women’s rights. Stopping to talk to them we learned a lot about the differences between the Suffragists and the Suffragettes’.

The visit was one of a series of events leading to a workshop which will be held at the college on Friday 19th October about democracy and community involvement. 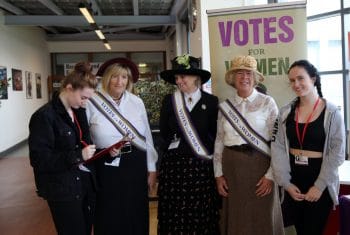