The Science of Success

The Science of Success

Jack’s choice of course came about after a complete 180 degree change on subjects. After originally studying History, Politics, English Literature and Philosophy at another institution he decided he wanted to study Science next.

‘After reading popularisers I came to realise the importance of Science’ Jack states. From there he enrolled on the science course at Solihull College. ‘The teaching faculty were a lot of help’ he says of the college, ‘if they see you are eager to learn and you show enthusiasm and effort then you are really guided while maintaining a level of freedom. It was such a fascinating subject with lots of options and there are many employment areas that desire a physics qualification’.

Jack’s course was mostly a theory course with a few practicals. After finishing at college he went on to study Astrophysics at university and graduated with a 1st class honours after what he describes as an ‘almost indescribable level of hard work.’ Jack completed his degree at Aberystwyth University where his final dissertation delved into ‘Solar wind conditions driving geomagnetic activity’. His aim was to prove if you can predict geomagnetic storms and how. He analysed data and trends both in space and at magnetometer stations on earth.

Jack hopes to do a Masters in Germany and has currently enrolled in a language course. He aspires to one day enter a career in engineering or science roles. 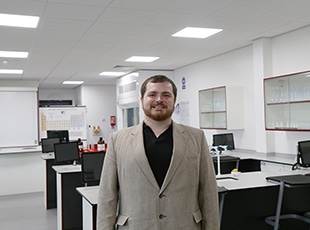