Last year Solihull College & University Centre sponsored then student and British Inline Skater, Tiffany James in order to allow her to follow her dream of being an athlete.

Tiffany studied towards her HND in Sport and Exercise Science before moving on to complete her Top-Up degree at the College. As well as studying Tiffany also threw herself into her sporting career and understood that her hard work and determination to succeed would only be able to get her so far as being an athlete requires a lot of financial assistance; this is where Solihull College & University Centre stepped in.

Tiffany represented Great Britain in 2012 at an international event, competing against the best skaters in Europe and has remained on the GB team ever since. Tiffany has also competed in the World Championships in 2013 and the European Championships in 2014 where she achieved her first individual British record in the marathon event and also holds the records for the indoor and outdoor relays as well as the 100m road. Most recently Tiffany has competed in the senior women category at the Indoor British Championships in Essex this year.

Despite Tiffany admitting to making a mistake in the 100m at the Championships she achieved 2nd place and won 2 gold medals in the 500m and 1500m events. Tiffany also secured a medal as she came 2nd in the relay, which saw her partner with her younger sister, Heather, for the first time.

Tiffany commented “I was extremely happy with the results considering my weak point is indoors. I would like to send my appreciation to Solihull College & University Centre and Principal, John Callaghan, for the high levels of support they have provided me with.”

As a result of Tiffany’s achievements at the British Championships she was awarded with the overall indoor trophy for senior women.

Tiffany hopes to continue with her success as an inline skater, competing in many events in the near future. 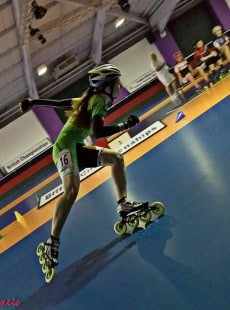