Darnell completed work experience as part of his Creative Media Diploma earlier this year, at Rugby Theatre where he filmed the performances of Jack and the Beanstalk. It was when filming the theatre production he was spotted and asked to audition for a role in the upcoming production of One Man Two Governors.

Darnell impressed in his audition and was offered a role within the performance which ran at the beginning of April. Darnell, who has always had a passion for acting from a young age, performed in front of a combined audience of 1602 across the seven shows at the Rugby Theatre and the show proved to be a huge success.

Currently studying towards his diploma in Creative Media at Solihull College & University Centre, Darnell enjoys acting and decided to study Creative Media at the College to expand his knowledge of the industry and have the opportunity to practice his skills. Darnell enjoys script writing and explains that his course allows his scripts to come to life as he films and produces videos as part of his course.

Darnell now has an audition for a performance of The Lion, the Witch and the Wardrobe at Rugby Theatre as well as auditions to have parts as a voice actor, something which he is keen to follow as a career path. Until then, Darnell plans to complete his course at Solihull College & University Centre and continue with his acting both at Rugby Theatre and elsewhere.

For more information on the courses available at Solihull College & University Centre, including Creative Media, visit the courses page or call 0121 678 7000. 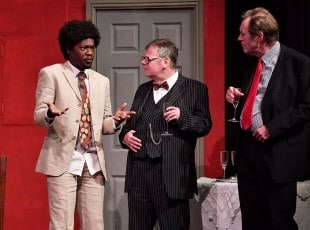