Solihull College employee, Zoe Jeavons is set to be a part of an exhibition entitled What if? The exhibition is a research project presented by Doctoral Researcher at the University of Westminster, Christine Douglass, where 9 women, who have been diagnosed with breast cancer, have been asked to tell their story and share their experiences using video cameras.

Zoe and the 8 other women taking part were provided with a video camera and asked to film their lives over a 10 month period and tell their story. The footage from the 9 women has been put together ready to exhibit in London and gives an insight into the lives of 9 women who have been diagnosed with breast cancer as it was believed that much of this usually goes unseen and unsaid.

Zoe comments “I was given a video camera to record my thoughts, feelings or whatever I wanted to do with my life and Breast Cancer diagnosis. It was actually very good therapy as with the best will in the world it can be hard to talk to people who have not been through it and speaking to a camera gives a freedom which I found very helpful.”

The film will be shown in the London Gallery West before being used in educational environments and beyond.  Zoe went on to say “All I can hope is that people see this project and will realise they are not alone and that for Cancer patients things are never the same even after treatment ends.  I am committed to doing whatever I can to raise awareness about the issues that Cancer patients and their families have to deal with.”

The exhibition is due to open on 26 June 2015 and run until 19 July 2015 at the London Gallery West at the University of Westminster and admission to the gallery is free. 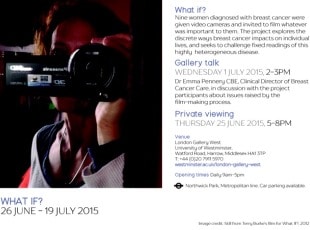