Recently Solihull College & University Centre have been experiencing successes in the construction sector, beginning with the return of the Skillbuild competition. Skillbuild organised by CITB has been running for more than 45 years. The competition sees the best in construction talent compete to be crowned Skillbuild winner of their craft. Regional heats are held over one day at a variety of colleges throughout the UK from April to June each year. This year the competition was held at South & City Birmingham College. The competition for all trades including bricklaying, carpentry, joinery, painting and decorating, plastering and wall and floor tiling was entered by a number of our students.

When the heats were completed, the highest scoring competitors had the opportunity to progress through to the SkillBuild National Final.

Within the plastering sector of SkillBuild, Thomas Grand and Taylor Doran of Solihull College & University Centre both entered the competition.

Thomas won 1st place in the new entrant regional heat and received a Certificate, gold medal, and a new plastering trowel.  To win, Thomas had to Plaster a 2.4m x 1.2m plasterboard, produce fibrous plaster moulds, mark out, cut and fix fibrous moulds to a specified measurement and fit coving to a specified measurement. He had 5 hours to complete these tasks. Work was assessed and marked on its accuracy, quality and cleanliness. Thomas was awarded first place. Having won the regional heat, Thomas is currently waiting to see if he has gained a place at the international heats.

Thomas Clarke, plastering lecturer and Michael Saunders, plastering technician assisted Tom with his training and are extremely proud of his achievement. Tom further proved how success in competition enhances skillsets and raises standards of work by starting an apprenticeship the day after his Skillbuild success.

Taylor Duran also entered the competition for senior plastering, the advanced competition at Skillbuild as a level 1 plasterer. Facing older and more experienced students than himself he showed excellent character and great skill offering a good account of himself and the college.

Both students are now working towards the advanced skill build competition on their level 2 plastering programme.

Carpentry students who entered were Mathew Welch who came 3rd in senior joinery after also taking second place last year, Ayrton Brown who was a new entrant in Joinery and Joshua Hurley who entered the senior carpentry.

The College Woodlands Campus aims to try and host SkillBuild on site in the future.

Carpentry successes also continued at the Institute of Carpentry competition. The event was held at Solihull College & University Centre’s Woodlands Campus. Over the past 5 years the college has won awards with over 20s and under 20s each year with competition continuing to get stiffer. Students who partake can view previous years work, meet older students and learn new skills. Judged by regional judges, college student Matthew Welch, 18, came 1st this year, his competition piece, a hanging sign is now going to London to compete nationally. Liam Rogers came in second place.

Arron Ward, lecturer for carpentry & joinery at the college stated ‘Matthew was outstanding, a committed student from day one. His hand skills were exceptional, he came in additional days and really went the extra mile, both he and Liam did’. 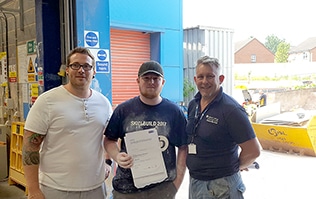