For 18 year-old Rob Rutter from Castle Bromwich, a successful career in construction would have seemed a distant dream after he completed school with one GCSE just two years ago. With supportive tutors, a renewed self-confidence, a passion for his course and a potential apprenticeship at major housebuilder Persimmon Homes, Rob is now thriving.

After having a tough time there Rob didn’t have high hopes for his future and felt increasingly low in self-confidence. Unsure of where to go next he decided to apply for a construction course at Solihull College & University Centre’s Woodlands Campus. The multicraft course covered the basics of construction and before he knew it Rob’s confidence had grown leaps and bounds. Rob’s mother Debbie Burrows was happy to see the positive changes in her son’s mood, ‘College has been brilliant for Rob. He started his course and his confidence grew and grew to the point that after his first year he was awarded ‘Outstanding student of the year’.

Such was Rob’s personal growth that at the end of the multi-craft element of the course he found himself torn between two of his favourite disciplines. He enjoyed both plastering and bricklaying and found himself caught between keen tutors who each wanted to teach him. ‘I loved both subjects, the tutor support has been amazing’ Rob admits. ‘I didn’t like anything at school but I loved everything at college’.

Rob ultimately decided on following a path in bricklaying and wasted no time making an impression. Mark Nicholls, Brickwork Tutor Assessor was impressed, ‘Rob’s work was already of a high standard when he began with me, but he is now a step up already, he listens has a really fantastic attitude and is on course to complete level 2’.

As he commenced his bricklaying course, Rob’s tutors mentioned a possibility of students who passed their CSCS tests being eligible for work experience with Persimmon Homes. ‘They explained that if we do the work experience it would put us in good stead for a potential apprenticeship’ Rob states. ‘Three of us leapt at the chance!’

‘It was a little jarring at first’ he admits, ‘an adjustment, but towards the end of the first week, everything clicked and my passion for bricklaying just took over’. The work experience lasted for 2 weeks in which the students were taken to site and dropped off back at college by Persimmon’s ‘Apprentice Master’ Robert Bayliss, a City and Guilds qualified tutor. Rob kindly introduced them to site and the work they’d be doing in Pershore at the Persimmon site. The students carried out general labouring, laid blocks and joined up. They were also able to partake in wall placing.

‘Work experience was a real confidence builder, the best I’ve ever felt about myself’. Rob admits. Mom Debbie is full of pride, ‘Rob’s tutors have been really fantastic. They pushed him to embrace activities such as a college organised outward bound course in Wales with his class. Afterwards, he told me it was the best week of his life. I’ve noticed such a change in him, he used to wear a hat, and multiple layers and try to make himself appear as small as possible but now he’s grown so much in confidence, he’s lost the hat. I’m so proud of him!’

Robert Bayliss, Apprentice Master at Persimmon Homes added ‘Rob was reliable, polite and had a positive attitude even towards the most mundane tasks. He was inquisitive and grew in confidence within the site environment as the work experience went on. I’d be very pleased if Rob was to join Persimmon Homes South Midlands on a full time apprenticeship and I’d look forward to mentoring him’.

Rob will be starting his third year in September and potential apprenticeships will begin in October, where students will spend 4 days on site and one in college. For now Rob’s future as a bricklayer looks brighter than ever. 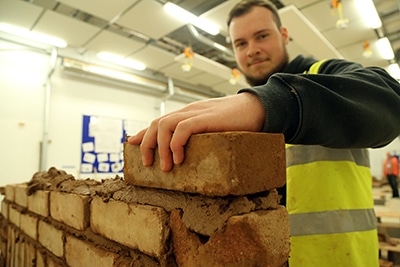