Julian Knight, MP for Solihull, met with a group of Solihull College & University Centre students on Friday 6th November who are working with youth charity The Prince’s Trust to gain experience and qualifications, in order to progress into work, education and training.

The Prince’s Trust last year helped more than 56,000 young people unemployed or struggling at school to turn their lives around.

“I was delighted to meet with the group from Solihull College, to hear about their ambitions for the future, and also discuss my role as their local MP. It was fantastic to see the Prince’s Trust, Birmingham Airport and other major employers and organisations in the region working together to support our young people.”

“Solihull College & University Centre is grateful to Julian Knight MP, the Airport, Jaguar Land Rover, Job Centre Plus and West Midlands Police Force for their support in helping young people on their journey towards getting a job. Youth unemployment is a problem throughout the UK and the West Midlands, and support from public and private organisations is key to unlocking the potential of young generations. We are also delighted that this group from Solihull College had the opportunity to meet with their local Member of Parliament.”

“We were delighted to support the Prince’s Trust at the Airport and also to introduce the group from Solihull College to Julian Knight, our local MP. As one of the largest employers in the West Midlands, we are committed to helping young people in our region develop the skills they need to move into work.” 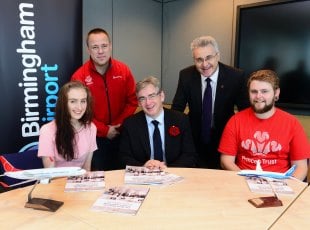