A Solihull College & University Centre employee Kathryn Pettitt has been awarded with the Creative Arts Award at this year’s Solihull Civic Honours.

The Solihull Civic Honours Awards, sponsored by Touchwood with the education awards being sponsored by Jaguar Land Rover, recognise those who are considered to be local unsung heroes who go above and beyond to make the borough a better place.

Kathryn, who is a lecturer and co-ordinator at Solihull College & University Centre for the Community and Education Team, has worked on a project named ‘Sustaining the Person within’ with fellow award winner and artist and previous employee of Solihull College & University Centre Jan Gay. Kathryn teaches adults part-time at the College, works part-time as an artist, has a busy family life and completes many projects within her community.

‘Sustaining the Person Within’ is a project which aims to raise awareness of the need for creative activities in older people’s lives as both Kathryn and Jan believe that identity can be quickly lost as elderly people enter the world of residential care and begin to experience limitations. Through creative activities Kathryn and Jan have been giving such people the opportunity to retain their personalities and offer the chance to reflect, explore and discover.

The project has now been running for over 5 years and has proved very successful through sheer hard work and determination from Kathryn and Jan. The group plans to develop the project further by providing workshops to those who are interested in becoming future leaders of the classes in the future.

Kathryn and Jan’s efforts were recognised recently as they received the Creative Arts Award, sponsored by Genting Arena, at the 2015 Solihull Civic Honours Awards. The ceremony was held on Wednesday 21st October where they were both able to enjoy the evening’s celebrations and gain acknowledgement for their hard work.

Kathryn said “It’s nice to be recognised and feel personally important to the project. It’s great that the council have endorsed the project and all the work we have done. We hope to grow the project and most importantly raise awareness of the need for creative activities in older people’s lives. I would also like to thank the Arts Council, Solihull MBC, local artists, residential homes & daycare centre staff as well as local people for their support, time, enthusiasm and donated resources.” 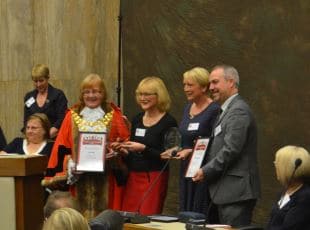